This post may contain affiliate links. We may earn a small commission from purchases made through them, at no additional cost to you. You help to support resin-expert.com

Despite being one of the more expensive resins on the market, ArtResin is still used extensively by do-it-yourselfers, resin artists, and crafters. It is well-known, and has an extensive product line. However, being often twice the price of other products, it leads many to ask – is ArtResin really worth the price? Can the cheaper alternatives perform just as well?

ArtResin is manufactured and distributed by ResinVentures Inc., a company in Dallas, Texas. The team that started ArtResin, a husband and wife, noticed way back that there was a gap in the market for resin to be used at home – by artists, DIY enthusiasts, and crafters.

They initially started using industrial resin (the only resins available at the time) to preserve their own photos. Still, later on, they started working together on developing their 100% proprietary formula – and ArtResin was born.

Probably the stand-out feature, especially for beginners, is the straightforward, equal parts mixing ratio, where you combine 1 part resin with an equal amount of hardener. This self-leveling resin cures to a high gloss, crystal-clear finish, making it ideal for a variety of projects.

You can use it to cover photos or paintings, create coasters or epoxy tumblers, and even use it in wood-working and jewelry projects. The built-in yellowing protection keeps your finished product looking great for longer, but as always, we advise you that all resin does yellow over time – some just take longer than others.

Make sure to follow the included mixing instructions and directions of use, and it will cure to a non-toxic, high-quality product: no odor, no VOCs, and non-hazardous round up its suite of attributes. ArtResin have their own lineup of liquid pigments to use so you can tint your epoxy to your heart’s desire – be aware, though, of the hefty price tag! You can use many other brands of dyes and pigments, though, should you so choose.

PLEASE NOTE: Make sure, before you use in your final project, to create a small test sample to check the compatibility of the resin and your chosen pigment or paint.

ArtResin comes in a variety of package sizes, which are as follows: 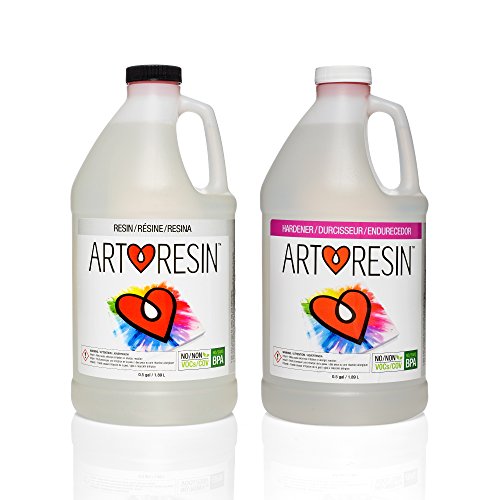 Mini – With this kit, you get 4 oz bottles of Resin and Hardener. This will cover about 2 feet square and is perfect for those just trying it out to see if it’ll work for them.

Starter Kit – A step up from the Mini Kit, the Starter Kit gives you 2 16 oz bottles and covers approximately 8 square feet. Enough for a few different, smaller projects.

Studio – With this kit, you get a half-gallon bottle of each of the resin and hardener. Use this when working on larger projects, or if you have multiple projects lined up.

ArtResin Accessory Kit – Everything you may need for working on your epoxy resin projects – nitrile gloves, a reusable mixing stick, and reusable spreaders. The jagged edges of the spreaders will help you to spread and level the resin. They can easily be cleaned, too – just wipe them with a paper towel, and they’re good as new!

Art Resin Calculator: How Much Do I Need?

As suggested by ArtResin, their epoxy resins should self-level at approximately 1/8 inch thickness. Keeping this in mind, the 1-gallon kit should cover around 32 square feet, a 2-gallon kit roughly 64 square feet, and the 32-ounce kit around 8 square feet.

If you are still unsure exactly how much you need, make use of our own Epoxy Resin Calculator.

What Makes ArtResin Safe To Use?

ArtResin has been certified non-toxic when used as directed, and was evaluated by a toxicologist at the American Society for Testing and Materials (follows regulation ASTM D4236). When fully cured, it has no free agents or solvents that can cause health issues, making it a clean system.

Even when uncured, the resin emits no VOCs or fumes and is engineered using the highest quality materials. All the components, even in liquid form, is non-flammable, and this makes ArtResin supplies safe for air transport. Another plus is that ArtResin has a very low odor, whereas, with many competitors, the uncured resin emits an overpowering smell.

ArtResin is a food safe epoxy. The fully cured resin is considered inert, which means it will not leach any agents into food that comes into contact with it. This makes it safe as a contact surface for food. ArtResin withstood rigorous testing and conforms to several international safety standards. 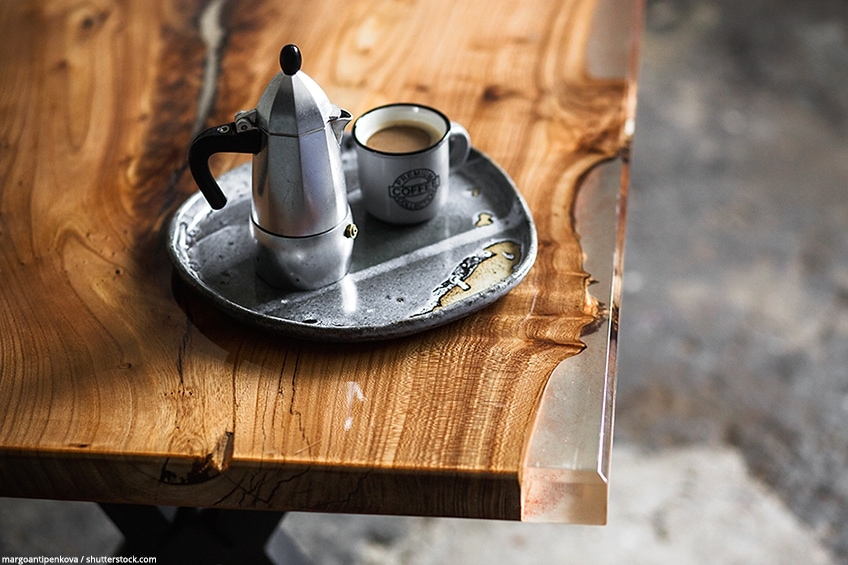 What Is ArtResin’s Heat Resistance?

The maximum heat tolerance for ArtResin that has fully cured is 120°F (or, 50°C).

At these temperatures, cure epoxy resin may become slightly flexible, but will return to its hardened state once it cools down from there. This means that the temperature from a steaming mug of coffee or tea will not damage a resin surface (either a tabletop or coaster), but a pot or dish straight from the stove or oven may cause severe damage – which can be difficult to repair.

ArtResin is not a especially heat resistant epoxy.

Fully cured, correctly applied ArtResin is entirely waterproof. It protects any surface or piece under the epoxy resin any spills, be it countertops or works of art.

Does yellowing occur with Art Resin?

Almost all epoxy resins will yellow over time, given they are exposed to prolonged UV radiation. In addition, the cured epoxy may also suffer from other degenerative effects, such as cracking, loss of gloss, and delamination. Most products on the market will include some sort of UV stabilizer to combat these effects, but in most cases will only delay, and not prevent, yellowing.

ArtResin has taken this yellowing protection to the next level, by including an advance additive named HALS (Hindered Amine Light Stabilizer). This additive is also used in preserving museum pieces, which mens the epoxy resin will keep its crystal-clear look for many decades.

What the HALS does is to prevent the yellowing process from starting in the first place, and this in turn keeps the epoxy clear when fully cured, and even when it is still unmixed in the container you bought it in.

ResinTint is Artresin’s line of premier quality, liquid colorants. Specifically crafted to be used in conjunction with ArtResin’s Epoxy Resins, they offer superior hues, and rich saturation. As with the ArtResin Epoxies, ResinTint is also non-toxic and conforms to the same ASTM D4236 safety regulations. 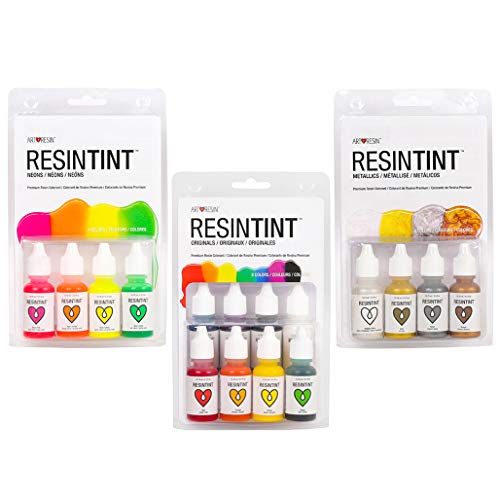 What Users Have To Say About It – Is It Worth It?

ArtResin has received a lot of positive reviews, and seem to have a loyal fanbase. There havave, however, been some negative feedback on the use of ArtResin. Complaints arose of excessive bubbling (micro bubbles in particular), as well as having a curing time much longer than most of its competitors and being more difficult to work with (too thin).

Others have noted that it does yellow, but keep in mind that this is something that all epoxies suffer from. Some users also felt that it is quite a pricey, though good product, and that similar products are on the market at almost half the price.

One advantage of the product line, is that you can opt for a small sized kit or bottle, especially if you are trying it for the first time. This means you can try it before investing in using it for large projects, and see if it is an epoxy resin that you can work with – and see for yourself if the quality is worth the cost.

If you are looking for a cheaper alternative with similar properties, we can recommend Pro Marine Proart: 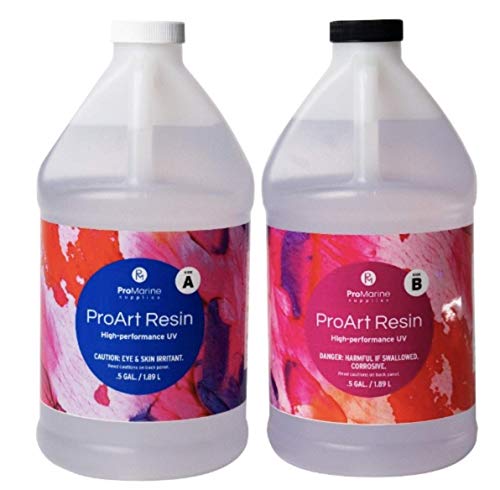 Is Epoxy Waterproof? Apart from Epoxy having a great filling and adhesive qualities, its best quality is its ability to seal and provide a waterproof and non-corrosive protective layer. Epoxy Resin is a very versatile material and is used in countless applications, not only in the industrial and commercial sectors but also for residential purposes…. Wood, as a material, is incredibly versatile. Furniture and objects of daily use can be made from this material as well as art objects. However, there is one decisive disadvantage: wood ages, and after a certain time, it even rots. The skilled craftsman, however, knows methods to make wood durable, or more precisely, not only… Choosing a paint color can be tough. What finish do you want? What color complements the space? Will the texture be distracting? Will you be able to use it again? The latter is a question that can pass through your mind if you’ve found a color that really speaks to you, and knowing that you’ll…

When you’re barrelling down the highway late at night you probably aren’t thinking about the lines in the middle of the road separating you from oncoming traffic, and who could blame you? Reflective coatings are something that most of us take for granted, just another gimmick designed by the safety-conscious establishment to ensure that less… Polyurethane creates a resilient coating for wood that not only preserves it for years to come but it can also bring out the natural beauty in the wood grain, as well as provide a premium glossy look to interior wood. If you want to stain the wood or perform repairs, you may need to look… Installing drywall can be a nightmare, especially if you are doing it on your own. This being said, many people choose to hire professionals to install their drywall and might often choose to finish and paint said drywall themselves. If you are one of these individuals or are thinking about finishing your newly installed drywall… 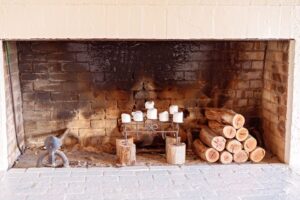 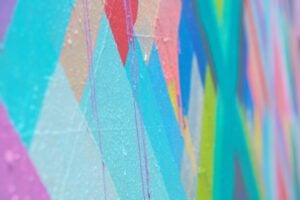 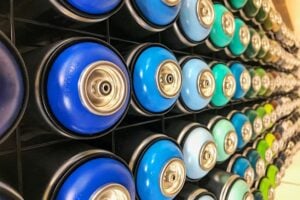